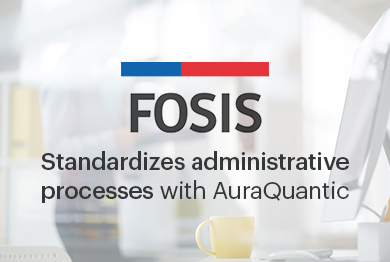 The Solidarity and Social Investment Fund, FOSIS, is a service of the Chilean Government that has standardized its administrative processes to comply with the new regulatory framework established by the Law of Digital Transformation of the State known as LTDE.

After over 14 years of using the AuraQuantic platform to automate different internal processes, the institution decided to launch this ambitious project to coincide with the new LTDE framework. This law focuses on updating the administrative procedures and document management in public administration, through digital transformation. Furthermore, the LTDE states that all communication related to administrative procedures, between the different public bodies, must be carried out electronically.

The relationship between FOSIS and AuraQuantic dates back to the beginning of 2009 when different managers of the Chilean institution decided to look for a technology solution that would allow them to “solve several process-level issues”, according to Gabriel Rosales, head of IT and Telecommunications in FOSIS.

To date, FOSIS has achieved important benefits using the platform, such as the development of a remittance system for Budgeting, which is used throughout the entire organization, along with a new version of its document management system.

To empower autonomous process development, a team from FOSIS completed the AuraQuantic Training School’s e-learning courses. These courses allow students to learn at their own pace and apply the concepts learned from day one. This has meant great cost savings for the institution and has expedited process implementation.

On the other hand, over the course of 2023, the Chilean public administration plans to create a system that will automate the FOSIS Family Program’s Technical Assistance process. In addition, it is planned to continue process automation, “as more projects will be incorporated in the coming months”, explains Rosales.

FOSIS is a public service of the Chilean government created in the late 1990s, whose mission is to contribute to overcoming poverty and social vulnerability in the country with strategies that strengthen social cohesion, skills and capacities of individuals, families and communities. Currently, this institution is composed of 16 regional directorates and 20 provincial offices. It also maintains a direct relationship with the Presidency of the Republic through the Ministry of Social Development and Family.